By his ExcellencyLieutenant General Sir Henry George Wakelyn Smith, Baronet, Knight Grand Cross of the Most Honorable Military Order of the Bath, Colonel of Her Majesty’s Second Battalion Rifle Brigade, Governor and Commander in Chief of the Settlement of the Cape of Good Hope in South Africa, and of the territories and Dependancies thereof, and ordinary and Vice Admiral of the same, etc, etc, etc.
In the name and on behalf of Her Majesty Victoria by the Grace of God of the United Kingdom of Great Brittain and Ireland, Queen Defender of the Faith.
I do herby Grant on Perpetual Quitrent into Gert Frans Henning a Piece of Land, containing Three Thousand Eight Hundred Morgen, situated in the Division of Albert, Fieldcornecy of Barnard Spruit, called Damfontein, Bounded North by the farms Braam Fontein and Patrys Fontein & Outspan, South by the Farms Ezels Klip & Dwaal Fontein, E. by the farm TygerHoek, W. by the farm Vaalbank – as will further appear by the …. ….. the surveyor, on condition that all Roads and Throughfares running on this land shall remain free and uninterupted; that the said Land shall be liable/ without compensation to its Propietor/ to have any Road made over it, for public good, by order of Government that the present and future Proprietors of the Land hereby granted shall allow the Public to Outspan, at the Outspanplace, as marked on the diagram hereto attached, that he shall punctually pay or cause to be paid at the …furation of every twelfth month from the date of these presents into the Civil Commisioner of the District the sum of Seven Pounds Sterling and be bound ….. to the existing Laws of this Settlement. To have the Boundaries properly traced out and the Land through into such ….. of ……. as is capable of ; the Land thus granted ….. further subject to all such Duties and Regulations as either … already or shall in future be, established respecting Laws granted on Similar …….
Given under my Hand, and the Public Seal of the Settlement, at Cape Town
This Seventeenth day June 1850
By His Excellency’s Command 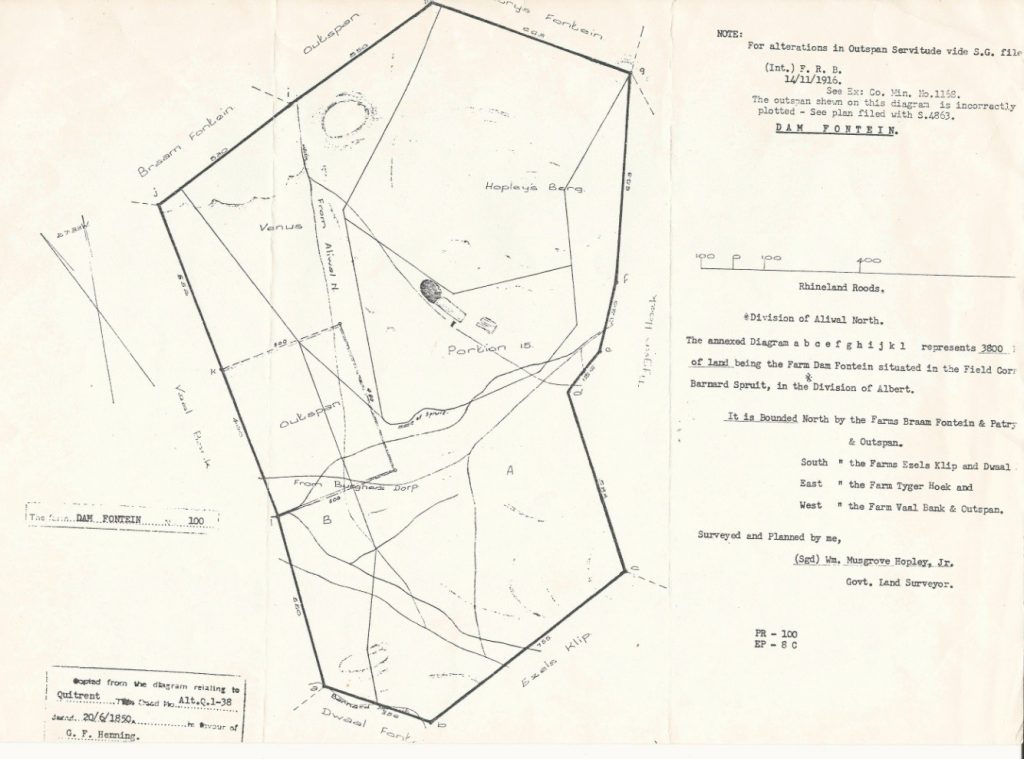